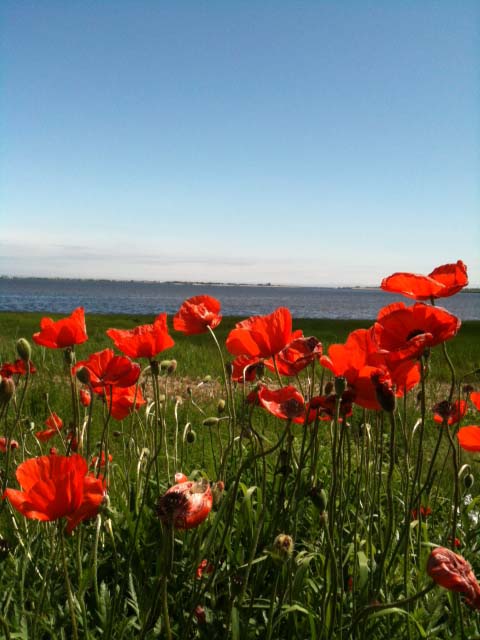 The name of the game is called distraction.  Photographing these dreamy red poppies, hanging out with my little guy at the park in the hazy sunshine, half-listening to Youtube while my mind wanders and slogs through the mush that is my brain, the result of being up since 1:30am. No joke.  It's a miracle I can even string these words together.

I haven't been sleeping well at all over the last several days.  Unusually bad actually.  As a person who needs at least 8 hours of sleep per night to function as a conscious and civil human being, closer to 10 if I need to think clearly and with any kind of creativity and efficiency, you can imagine how this is wreaking havoc on my already wonky biorhythm and energy, not to mention my mood.  A part of my psyche is obviously chewing on something significant, but the rest is stubbornly working very hard to stay blissfully unaware.

This morning my eight year old was left to his own devices and made breakfast for his little brother and himself, a first in this house, because his mom was practically comatose on the couch.  A side note, this incidentally was not a bad thing as it turns out the boy is actually very capable and I don't have to cater to his every supposed need as he made waffles and sliced apples with ease and success, save for the mess he left behind.  Though I shudder to think about the gratuitous amounts of syrup and whipped cream I'm sure they consumed as well.  Note to self: less management needed during morning routine (yay!).

So instead of trying to write the post that is on the tip of my tongue but hopelessly stuck in the tangle and fog (I can only write, delete, re-write so many times and am fairly certain when I read this it will be utter jibberish), I'll just leave you all with visions of poppies dancing in your head.  Hey!  Maybe they'll even inspire some sleep.  It worked on Dorothy.  What I wouldn't give to be her, fast asleep in that bewitched meadow just outside of Oz, right about now.