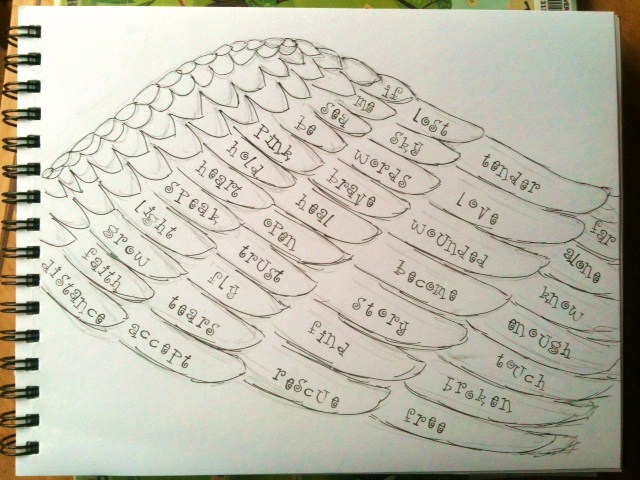 I first heard this song at a workshop with Sabrina Ward Harrison out in L.A. a couple of summers ago, and it has stuck with me ever since.  Maybe because that weekend, immersed in paint, red wine and plenty of juicy soul searching, was such an unforgettable life experience (adventures at Chez Swirly always are), or maybe because it's just one of those songs who's lyrics seem to sing straight to the center of my being. I've had the song on repeat over the past few days and along with the recent broken wing rescue mission, both have inspired my next piece now in the works.

Alex and I have found ourselves on a wild ride, rounding the corner soon on fourteen years of marriage and twenty years together.  Half my life has been spent hand in hand with this person and that's pretty mind boggling.  I often wonder if most marriages are made of the stuff ours is, deep commitment, bridges of intimacy we never knew were even possible, rivers of pain that eventually dry up but tend to swell during stormy times, a knowing in one another that just doesn't exist with any other human being, and moments so fragile and sweet I feel like my whole world is love and light.  It's the entire technicolor spectrum:  from passionate red, to the entirety of white, to the joy of yellow, to the wallows of blue, to the nothingness of black, and every shade in between.  That's the best way I can describe it.

We work a lot on our relationship and some of that is out of necessity and some of it is by choice.  As two fiercely independent and sentient people neither one of us feels truly contented with standing still and are prone to digging deeper and reaching for the tender parts.  This sometimes is really quite a shame, as life might be a whole lot easier for us if we could just surf along through the years skimming the surface and tra-la-la-ing merrily on our way, but we just aren't wired that way.  So I often wonder too if this creates more toiling for us, or ultimately a stronger and richer connection.  I think the answer is both.

There are times when I am in a better place on my journey and at times he is on higher ground and has a clearer view of the vista, and sometimes as it turns out, it is years of being in different places.  I understand that this is simply the way... we walk, we wait, we climb and navigate the terrain sometimes side by side and sometimes apart, but always in solidarity.  I've come to also learn the way is not a straight line (lots of doubling back and finding alternate routes) and that there is no real final destination which is how we end up coming upon some of the most beautiful  and breathtaking spots.

We both enjoy and need solitude as much as companionship, to keep our separate shores, and at different times along our way one of us might require more of one than the other.  So much of staying the course has been about learning to trust the rhythm of that sea moving between us, that we are always there for each other even if one has stepped of the path to smell the roses (or photograph them, as the case may be).  Then just as certainly, we will find each other on the next peak, zip our sleeping bags together and snuggle in close for a good long while to gaze up at our starry sky, in exhausted albeit exhilarated gratitude, and marvel in the wide wonder of it all.

There certainly have been many moments where I have felt lost and didn't know if we could find our way back to one another, but so much of this marriage I think is a conscious choice.  It's a choice to not press the eject button even in the moments when it means bearing a wound that momentarily feels potentially fatal, because we always, always, find the other side.  We've learned to communicate through everything, even the stuff that feels impossible to say out loud.  Sometimes we even stumble over the greater lesson of it all and for the next leg of the adventure this lightens the load as we head off into the unknown ever-after once again.