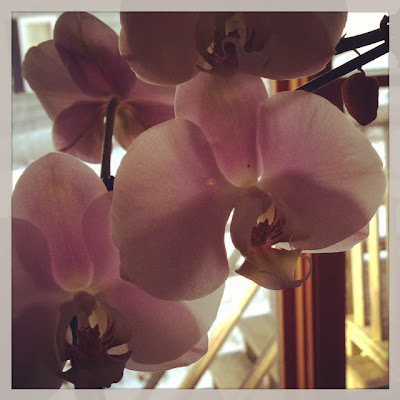 Today is one of those days where I wish I had control of the outcome.

My son came home from school not feeling well yesterday, flopped onto the couch and barely moved, only to eat a spicy tuna melt, until it was time to go to bed.  I think it might have been he was caving under the amount of homework that was loaded on this week, an unusual pile of tests, projects and worksheets all due tomorrow which at this point probably won't get done.  I'm not so terribly concerned about that.  I'm more worried that he actually is sick and will be home from school today with some icky malaise.  At least he escaped the round of lice that went around his class recently - thank the powers that be for that (!) because I think that might be a motherly job that I would epically fail at.  That. Is. So. Gross.  We'd also have to cancel the trip to the children's museum that I have been promising my youngest for what seems like forever.  Every day he has been asking, "Is it Thursday?" with the same hopeful excitement as when he kept asking us "Is it Christmas?" for weeks.  Yes, he's that excited (a three year old's world is so simple).  So as I write this, the two of them are still asleep and our fate still hangs in the balance.

But these bumps in the road are small potatoes, the subplot of the whole adventure.  What really is the monumental hurdle of the day is what my husband has to face at work this morning.  I can't divulge the details quite yet but let's just say that in his 15 years of working at his school, the jabberwoky that he has to slay this morning is bigger and meaner than anything he's had to face thus far.  Really, it could determine the fate of everything in the schools orbit.  God, I hope he remembered his vorpal sword.

I read something the other day about standing in your own power and how that is a different action/reaction than giving your power away, and I have been thinking about this ever since.  Just like Alice believing in impossible things, which is a notion that I like to think I can embrace.

Stand in your power, don't give it away.

What's interesting about this dramatic turn of events, which began unfolding last Friday, is that Alex is pretty calm about the whole deal.  He's been swallowed by the beast, but he knows what he has to do and has been moving through this with a certain grace and self-awareness that I've never really witnessed before.  He is somehow holding it together, frustration and worry aside, plan B and C at the ready, holding onto his power fiercely.

I think you can decide whether or not to crumple under the pressure, and when you ultimately decide not to it all becomes a bit easier and clearer.  You do what you have to do, address what is right in front of you.  There are no tricks or magic spells.  Standing in your power is being with the moment and honoring it with all that you are.

My fingers (and toes) are crossed that the good guys defeat the bad guys today.  They are the ones who deserve to win.  I'll hopefully be at the train table or in a yellow submarine imagining far away happy places with one blissful little boy.