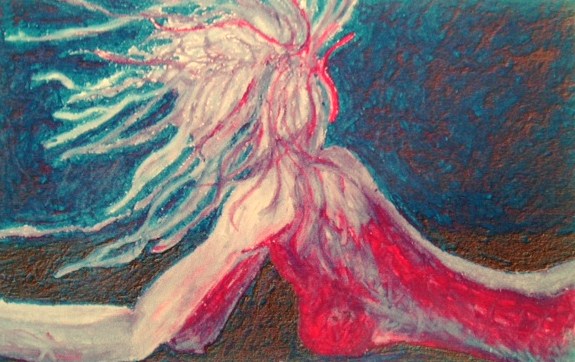 {art by karen davidson eklind}
Admittedly, I like to push buttons and nudge people out of their comfort zone.  I think I always have, which is why I love to spark people and get them excited about their lives, but I guess I'm just a bit wary of only showing up as my shiny artsy self.  Really, I love this part of who I am and she mostly rules the roost, but I guess I never really told you that she cohabitates with a girl who is restless and daring and likes to get tangled up in a bit of delicious trouble every now and then.  I'd really like to introduce you to her because she's pretty fun and has some good stories to tell, but truthfully it's kind of scary - she's not the kind of girl you would bring home to meet your mother, and honestly I haven't even introduced her to mine (so there's that).

It's not just about the shock and awe though.  I have felt more and more over the past few years, parallel to an integral journey that maybe someday I'll share with you once we're all bff's, that these two paths want to intersect.  It even seems harder to keep them separate than to let them comingle, because in my world and in my head they already do.  These girls are two sides of the same coin and it feels a little disingenuous sometimes, not always, that you only know one of them.

Who knows?  She might make a guest appearance every now and again.  Actually, I think that she already has.  She's kind of forward like that.