mar.26 {how to fall in love with a great idea and let it go} 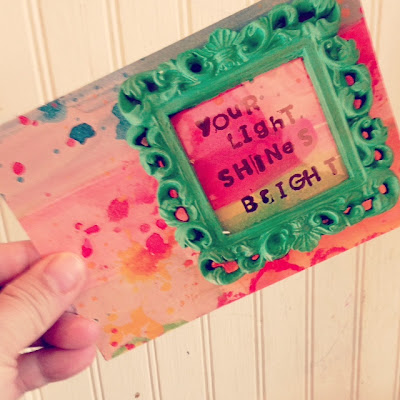 {postcard from the Love Notes swap, by Gloria}
I woke up way too early this morning with an idea, the kind that feels like fire in the heart and head.  I lay in bed for about twenty minutes trying to mentally file it away until a decent hour, but I just couldn't keep the thoughts from bubbling to the surface so I got up and wrote it all out.  The page is sitting next to me as I type, covered with fast writing, arrows and notations, and a jumble of thoughts that probably only I could decipher.  I can feel that thrill and nudge to take action.  This happens fairly frequently in my busy brain as is evident buy the many notebooks I have filled with creative thoughts and ideas, but my new practice is to not move too impulsively,

Let. Things. Marinate.  I am learning to quell immediacy.

Because immediacy just comes from a place of fear.

The other day I had a similar burst.  It was inspiration that just began to manifest itself and all I could do to simply try to catch it all and not hyperventilate with excitement (you know that feeling?).  I covered 5 full pages of notes before I knew it and was building the website in my head, the little details clear and certain, all ready to dive in.

The idea was good.  Really good.  But the next day I let it go.

I let it go because even though it was one of those heart racing, mad scribbling inspirations I realized after sitting with the idea and looking at it through several different lenses that it wasn't for me.  It just didn't align with where I want to go, a different direction my inner compass is undeniably pointing me toward these days.  It would be a sideways step, maybe a successful one, but not on the path I truly  want to go.  I often fall in love with the idea of an idea and that sometimes pushes me to jump on it.  Other times I worry that if I don't act on an idea right away I might end up losing the inspiration or even worse, the opportunity.

The truth is there will always be good ideas and it is worth it to wait for the right good idea, one that fits into the context and subtext of who you are and where you're yearning to go.  It all comes down to one simple thing,

Trust in the limitless abundance and potential of your creativity.

I can feel this notion as a game changer.

So upon giving up the not-for-me idea, I wrote notes detailing what about it that was so appealing.  What specifically had captivated me and made my heart race?  What was I going for as the end result?  Such a good exercise, easily pinpointing where it fit (or did not) into the framework of my life and it showed me where I needed to go instead.  It was a very visceral redirect that I could feel from the inside out, like a sigh of relief and inner recognition .  I also think it cleared the way for what came through today proving once again, you have to let go of one thing in order to catch what comes next.

A big part of seeing all of this has been by becoming more familiar with the feeling of discomfort.  It is challenging (in that good way) and helping me to navigate better.  The unease of taking a chance, sharing a truth, or letting something go you think you want, all feel so similar.  The more I step into that space of unease, the better I get at breathing through it.  It doesn't make things less frightening, it just allows me to stay more grounded and not fly off in the wrong direction, and this act of standing still has been opening doors in new places.

The more I'm vulnerable, the more I see the big picture - the amplitude of my life.

Knowing the difference between what is an honest reality check or what is just a wall of fear holding me back is the tricky part, but it never hurts to wait.  I also believe that if it is meant to be there is less resistance, obstacles begin to clear and things come together fairly organically.  I'm not saying there is no fear or hard work involved (there is both for sure!), but I think if your are trying too hard to piece things together something is probably not working.

Often this process of fine tuning or letting of an idea go altogether is ultimately what leads me to the juice.

So I'm marinating with today's idea and will look at it with fresh eyes in a few days.  That space will give possibility a chance to grow.