apr.13 {inspiration has a story} 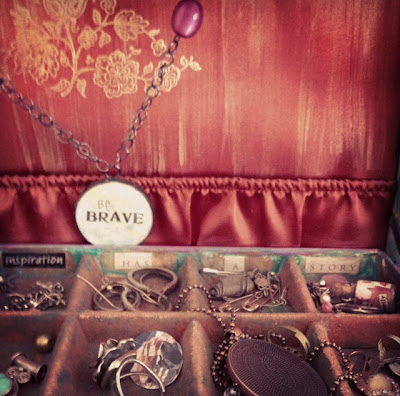 Throughout my creative journey there have been a lot of projects and ideas I've undertaken, some wonderfully successful and others that were not.  I thought in the spirit of truth telling and Gina's brave previous post, I'd share with you what happened to some of the bigger projects I began that never made it off the ground.  Each project was a hands-on learning experience none the less, and I hope that by sharing my experiences you might find some helpful inspiration in the lessons that I've learned.

Wishstudio (the brick and mortar):  There have been two tries at having my own creative community space, one very early on in '07, and the second last year.  Both were very different experiences and didn't take flight for different reasons.

The first Wishstudio, birthed inside an artist's building and studio community, was actually where the concept of collaborative community began for me.  I had the vision of holding space for other creative living types in one happy place.  I saw the value in supporting one another's creative ventures (art, yoga, creative entrepreneurs, etc.) and knew if I could bring together the kinds of offerings I was interested in that there must be others who would want to dive in as well.  It was long before I had the the language of Creative Living and creativity as a lifestyle, but I felt it deeply inside of me.  The building itself was having trouble budiness-wise soon after I moved in (it folded soon after I left), and ultimately I didn't have enough local contacts yet to fill the studio with events and classes.  Though I had the studio concept in my head back then, I hadn't distilled that down to a clear, marketable idea until later. I struggled to put words around what the studio actually was.  I simply was not far enough along the path to know all I needed to.

The second incarnation came the fall of '11, rooted in the deep blogging community I had created over the previous 5 years online.  I clearly understood what I wanted to create - a space for my own creative life, and a space to nurture the creativity of others.  It was the same concept as the first attempt just with more clarity and resources.  With my online studio business as the anchor for the brick and mortar business and a deep well of artists and creatives from all over who wanted to come to the studio to teach, things got off to a great start.  The decision to let this space go after 6 months was due to two things, first, the space was too big and in a desirable part of town where the rents were high.  Though I really wanted to be in the mix of the busy downtown, I ultimately didn't need the foot traffic for a business that had a more word of mouth kind of draw.  People weren't simply walking in off the street unless I was offering a shopping kind of experience, and even in a tangible setting I had to really stretch to find my community that is fairly niche and spread out.  I did meet a lot of amazing people, which I am so grateful for.  The second reason was the family crisis that came in the midst, and I knew I would not be able to devote the time and energy at the level I needed to to keep things going - the online business as well as the local studio.  Even though it was really hard, I made the only choice I really had.  In the end, I realize it was simply too much for one person to manage even in the best of circumstances.   I will eventually find a way, and the right time and place, for this studio dream to work.

The Co-op:  This was such a passionate idea, and the initial research and feedback I received was really positive and promising.  My motivation was to bring creativity to people in a way that was accessible and abundant after seeing and experiencing the hurdles of many creatives, not enough money/resources in a sea of desirable classes and workshops available.  On the flip side were the artists who were interested in teaching and needed a supportive launching pad for their project.  I wanted to help them as well, the way I was able to in my virtual studio.  I thought if I created a self sustaining structure that would both feed the artist and the teacher it would become a really devoted community that would end up having more opportunities and teachers could find the support and interest, including new projects.  In order to maintain this life cycle there needed to be a certain number of classes as well as members.  Again, there wasn't enough man power (just me) to generate this kind of volume.  I still love this idea and believe wholeheartedly that community and collaborative business is where things are heading, but the vision was simply too big and the idea in the creative realm, too new.  I am sure that someday we will see these kind of creative living co-ops really emerge.

The Necklace Project:  As things stand, this project wasn't necessarily a failure, but it just lost steam in the end.  The number of participating artists who wanted to create charms for the necklace was fairly large and the timeframe too small.  I didn't consider the big lags in time that would happen between artist to artist, and so about halfway through and two years in, I decided to put the project on the shelf.  People were enthusiastic about participating in the beginning.  I just didn't know about the common latter-fizzle phenomenon that happens in a lot of these long-term creative projects and classes.  I also learned that for me, shorter term projects are a much better fit.  Anything that is extended with any sort of proscribed regularity is not my strength or style.  My creativity works so much better in the moment, and I am still learning how to successfully maintain the slow and steady approach.

Overall, I have learned that support and resources are key, collaboration and community are a deep value of mine, I tend to have big visions that need to be approached in smaller steadier bites, and a lot of the business admin side of things are things I either really dislike (like marketing) or struggle with and need to delegate (like accounting).  So going forward and with every new project I undertake I learn a bit more about what works for me and what does not, what my passions really are and what I need more help with.  It is all a hands on learning curve and giving things a shot is worth the attempt whether or not it ends up being successful.  One is a always a building block for what's next.