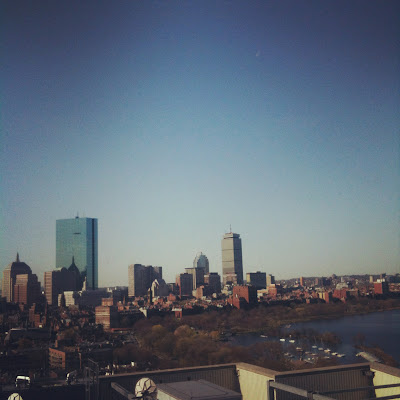 I was hesitant to go online this morning, to see the headlines (which I haven't looked at yet), and find the number of injured and fatalities had risen over night while most of us were tucked safely in our beds.  I was worried at the top of my facebook feed would be posts from my friends who discovered there was someone they knew who was caught in the melee.  Yet this tragedy already feels like a dear old friend was badly traumatized and hurt.

Boston is the taproot of this small eastern state, and in many ways my life.  Having always lived little more than a thirty minute drive into the throng, it's a place that feels like home in so many ways:  It is where I became a citizen of the United States when I was 4.  It's where my father worked when I was growing up and where my mom would sometimes take my brother and I on special trips into the city to watch him play softball in the shadow of the big skyline along the Charles.  It is the place where I saw the Nutcracker as a little girl, year after year, a special treat for me and my mom followed by ice cream sundaes at Baily's.  Where countless times there after I've gathered with friends in the theater district amidst the bright lights and excitement of a night out on the town, or in the mad crush of Faneuil Hall eating decadent food and buying souvenirs with family here visiting our corner of the world.  It is where I celebrated the most special occasions, like the night at the Top of the Hub after my Nana had finished chemo and a victorious round against cancer - where one of my most favorite and memorable photographs of her was taken with the lights of the city and the magic of that evening sparkling around us.  It's where my dad's cancer was battled and cured as well.  This topography is what I first see from an airplane and immediately think and feel with every bone, home.

This city is also where Alex and I first lived, on the fringe of the urban pulse and on the edge of what would be our life together, Boston was our playground.  We stayed up all night in the park, kissed unabashedly in taxi's in the wee hours of the morning, partied on rooftops with close friends, and have spent more happy times in the nooks and crannies of Beantown than I could possibly recall.  It's where Alex now works and where I get to take my own kids, just like my parents took me, to explore and fall in love with this city one memory at a time.  My boys don't know it yet, but Boston is already a part of them as well.

So sitting here on the morning after I don't even really know what to say.  This is crushing for so many reasons.  My beloved town and the hearts and spirits within and surrounding are hurting, and even though I am blessed enough to not know anyone personally who was afflicted (my love goes out to all who were), those of us who consider Boston home, I imagine, have all been effected by this tragedy.  Although surely goodness will prevail, my heart is a little broken for each and every one of us.