apr.29 {happiness is getting ready for my first art show} 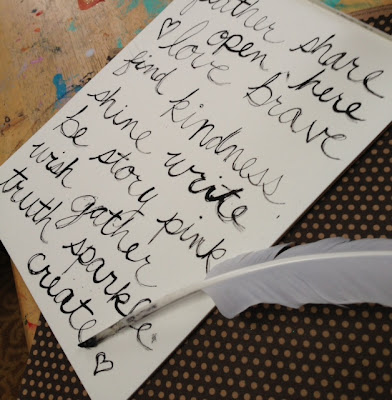 Over the weekend I applied to an art show and I was accepted.  I'll be selling my art at a local artist's market as part of a community wide open studios.  Last year I attended this event as a spectator to both see the art as well as meet other artists and check out different studio spaces.  It was a great day.  I felt like a fish in familiar seas, and that notion was just so hopeful and exciting.  I was on the verge of accepting a studio in the Joy Street Studios building, had met a studiomate and everything, but as things shifted with work and my dad's health I decided the timing just wasn't right.  It often feels like these kind of opportunities are fleeting and that decisions are a bit urgent (at least that's how it feels to me a lot of the time), so when something fabulous comes along it's hard to turn it down.  But it was the right decision, then.
A whole year later I'm back in my creative groove and have so much more focus on what it is I want to be doing with my creative life.  This show is just one small example of that.  Even though I know it's a great opportunity for me, I still hedged on whether or not to say, yes, because it will be my first show as far as focusing on and selling my own art.  I've been on the organizing end of several shows for other artists, but have never participated myself.  And it is only a week away!  If you're thinking "what was she thinking?" I'm totally with you.  Often though, it takes a big push like this for me to dive into such things, a hearty combination of momentum and pressure to produce.  The deadline will help me get it done otherwise I am likely to ponder and peruse way too long, and things would progress at a snails pace.  I could have done with two weeks, but it is what it is.
I have no idea, well a very vague idea, of what I want to sell and I have very little as far as inventory, packaging, display, so you know what I'll be doing all week.  The prospect of digging into this project and spending some purposeful time in the studio has me a bit giddy.  I'm hoping to go and just get this first experience under my belt.  However it flushes out, I am really looking forward to it.  The goal for me is to not to try and do too much and make myself crazy in the end.  I simply want to get out there and show up with some of my art, and have some fun.  If I make a sale, that will be icing on the cake.
If you live in the Boston area, come by and see me!  I'd love to see some friendly faces as cheerleaders. I'll be at The Burren's SLAM artist's market, venue #15 of the Somerville Open Studios.  There is even trolly transportation taking people to the various stops around town.  It's an inspiring, well organized event with a ton of amazing art to see and handmade goodies to buy.  What could be better, right?  I'm totally nervous and excited.