jul.10 {hello middle age...can we please just get along?} 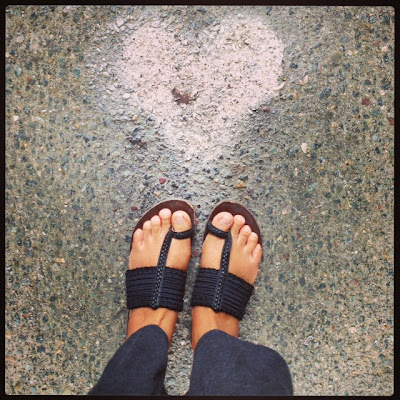 It's been an eventful week... summer camp for the oldest has begun, my littlest turned four yesterday, and I think that I've had my first real and unceremonious encounter with menopause.  Yep.

Sunday night I woke up out of a dead sleep because my heart was racing.  It was enough of a pound, pound, pounding and dizziness that it had me up and out of bed taking my pulse and considering going to the emergency room.  Rationally, I thought it was maybe anxiety, but I couldn't really put my finger on any overwhelming source of stress.  I'd had one panic attack about six years ago that ultimately did send me to the ER and thankfully turned out to be nothing, and this felt similar.  So I breathed through it enough to fall back asleep, but I kept waking up with the same intense fight-or-flight sensation. Needless to say the next day I felt horrible, so I called my doctor to make an appointment for later in the week and she promptly sent me to to the hospital.  Had she not insisted and gone ahead and pre-admitted me I probably would not have gone in.  I really felt like it was something other than an emergency cardiac scenario, but the next day was my son's birthday and the tiny sliver of uncertainty had me thinking how I didn't want his celebration to become the day his mom ended up dying.  How horrible would that be?

To my relief, it did end up being nothing emergent.  All the tests were good, they gave me some fluids for dehydration (damn heat), and sent me home.  The next night when I was up at 2am with the same disconcerting symptoms it somehow suddenly occurred to me that it could be hormonal...the big M.  I googled the symptoms of menopause and lo and behold I was a dead ringer for about 8 out of 10 of them, average onset in the early forties.  That explains a lot.  I guess I am of that age after all, and now I'm also wondering how many women end up in the emergency room with these early symptoms?  So now it's on to figuring out how to manage this next phase of womanhood.  Thoughts, suggestions, pretty please?

Today, I feel a little clearer and have a bit more energy to tackle some of the projects waiting in the wings.  The painting I started last week, the final zine edits, getting ready for a gallery event tomorrow, a collaborative fall workshop and my art journal are calling.  My creative flow overall has been like a slow drip and most of that energy went into birthday party preparations which included an Enderdragon cake (thank goodness for the bakery and Owen's brilliant idea to have the imaged printed in frosting as I was utterly struggling with how to construct such a cake) and an abundance of the requisite flourish and fun, balloons and all.  I think I've been jump started again by my four year old's sweet excitement and enthusiasm for this life and all the love that surrounds him - the stuff that's good and really matters.

I tell you, never a dull moment around here.  And it's only Wednesday.